My Helmingham assignment for November/December was to visit the Hall during one of its special Illuminated Garden nights, held between 23rd November and December 8th.  This was very exciting, as I had neither experienced such a spectacle before – nor been asked to take images after dark.

So armed with tripod, wide angle lens, remote shutter release and dressed in several warming layers of clothing; Rusty and I set off for the Hall on our mission …

I arranged arrival just before dusk, so that I had the chance to set up my equipment and do a few practice shots before the first visitors arrived. I love the architectural style of the Hall itself, so knew I wouldn’t be disappointed with how it looked at night. Needless to say, it looked amazing. 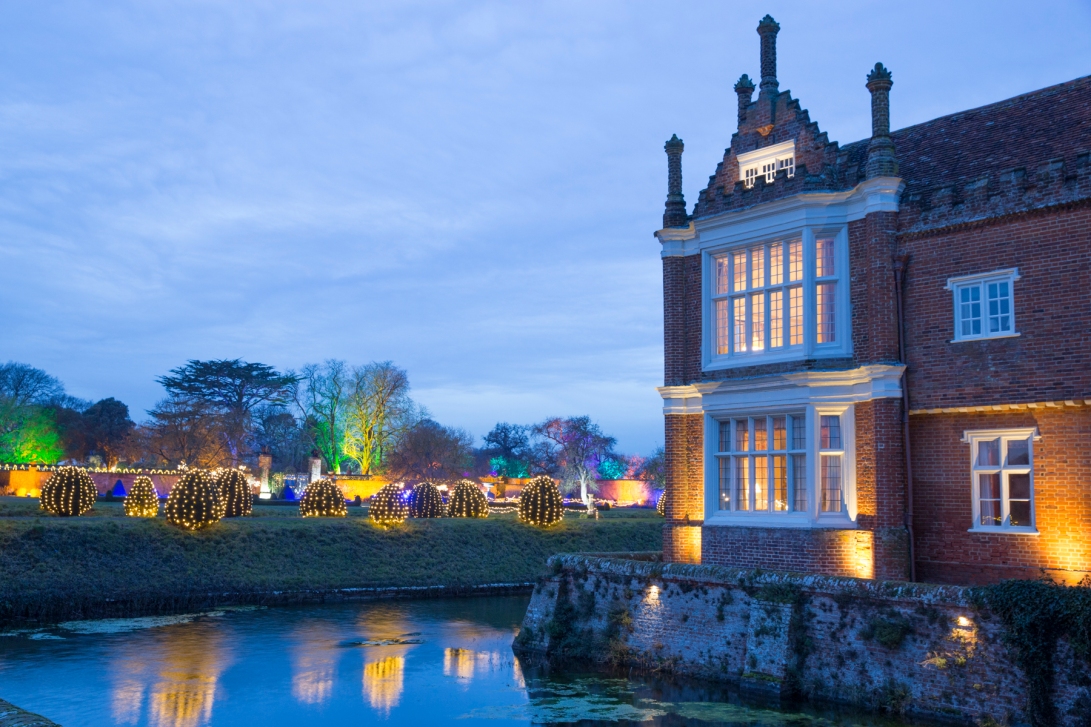 What I couldn’t have anticipated was how beautiful the main structural elements of the garden would look either adorned with lights or strategically lit.

The Yew topiary domes that line the causeway between the Hall moat and Parterre were covered in bands of fairy lights, which reflected beautifully in the water. The Box topiary of the parterre was lit with a misty blue, the urns with a soft white light that emphasised each flute and scallop of their lichened surfaces – and the brick wall was lit with a warm golden hue. 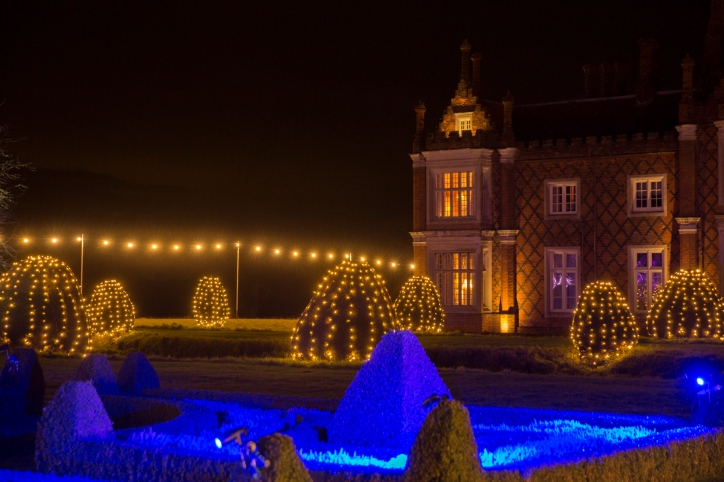 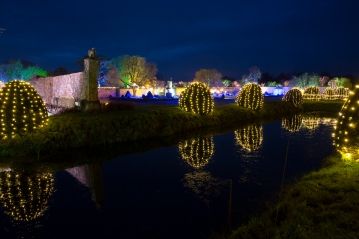 Wonderful mistletoe-like balls of light hung from the two Mulberry trees.  The wind was brisk and chilling and served to swirl these balls delightfully in a mesmerising dance. I decided to capture their movement in a long exposure in the second image. 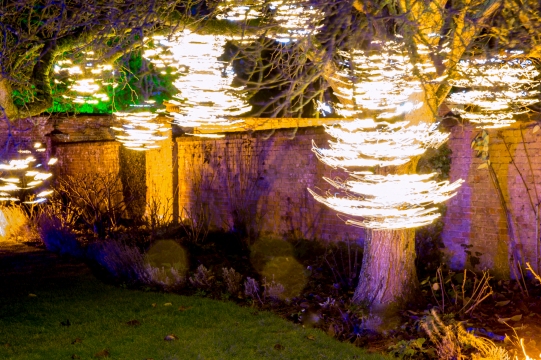 The nearest tree to the hall stood majestically bathed in a green and purple light; and a double row of white paper lanterns heralded the start of the trail around the garden. 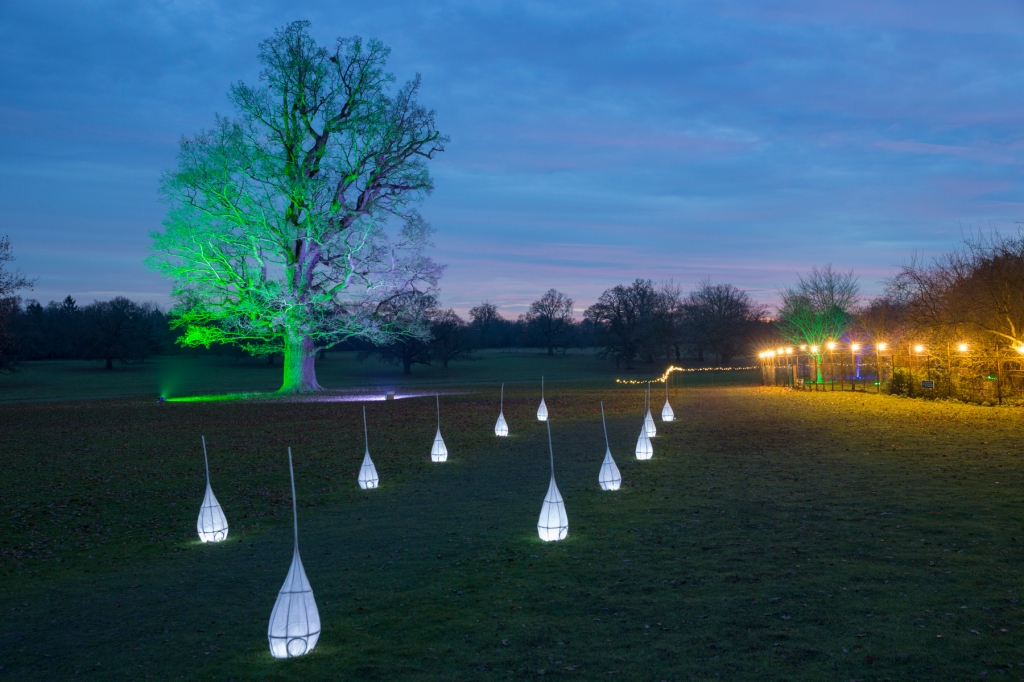 The spirit of Christmas was enhanced with musical excerpts from the Nutcracker Suite and traditional carols – synchronised with the changing colours of the lights adorning the Apple Tree Walk; the latter forming a dramatic backdrop to the view from the Hall, garden moat and across the Parterre. The ‘Carol of the Bells’ was particularly stirring. 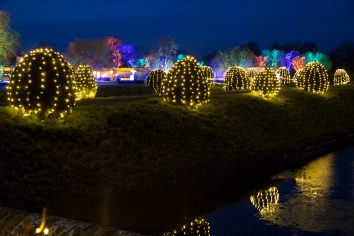 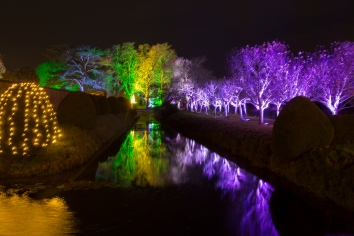 As the first throng of people arrived, Rusty found visiting each and everyone irresistible, so unfortunately I had to return him to the car so that I could fully concentrate on my images. The guests, arranged in timed tranches, followed a designated trail of lighted paths throughout the garden, after first being welcomed in the courtyard for either a Christmas Punch or Mulled Wine. On my return to the Hall, I took advantage of the wonderful warming cup of mulled wine. The intoxicating smell of spices and the heat of the wine as I drank added perfectly to the magic of standing on the cobbled courtyard of this wonderful building, admiring its chimney, towers and gateways from a privileged new perspective.

As I followed the trail through the trees to the south-west of the garden, there were plenty of delights to charm children and adults alike, such a glitter balls, bubbles, fairy jars and Christmas Bambi. 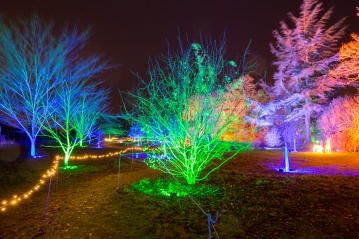 Once the trail reached the walled garden, I could see that the long tunnels had been beautifully lit with thousands of fairy lights, glitter balls and paper star lanterns. I particularly enjoyed the line of illuminated eggs. 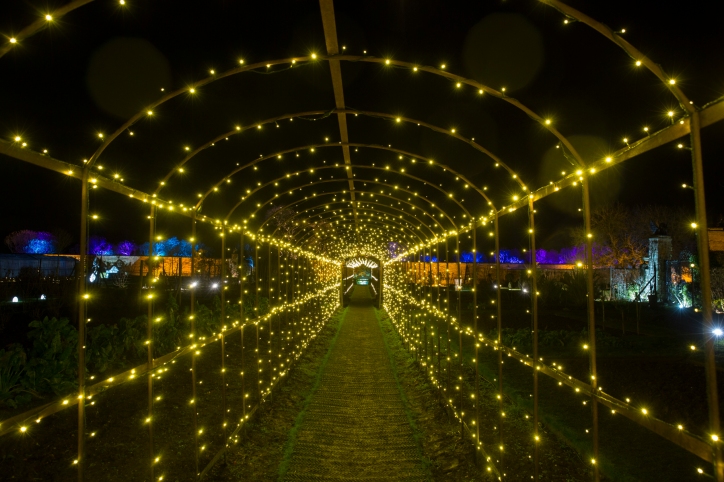 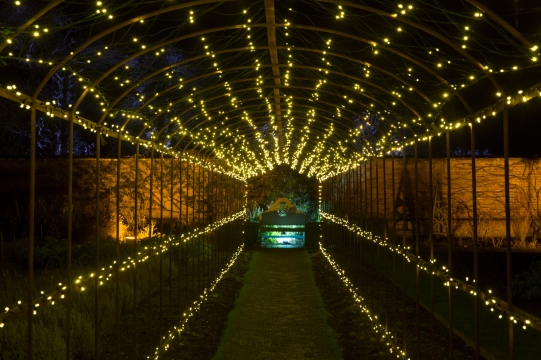 Over the bridge crossing the garden moat was an area for visitors to sit, eat and drink – and toast marshmallows on open fires.

The route back to the Hall took me along the avenue of apple trees with its stirring music and changing colours. There was also a beautiful view of the bridge, reflecting in the moat and changing from orange to blue to purple – magical.

The Hall itself with its yew domes gave me my favourite views of the evening. I loved the reflections in the moat, the warm glow from inside the hall … 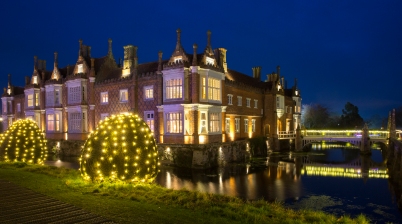 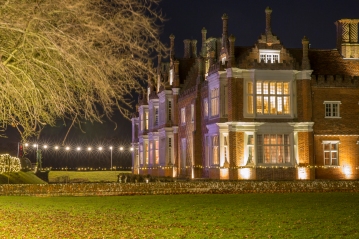 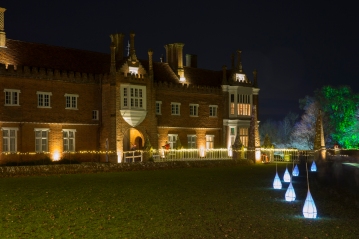 … and the glimpse of a beautiful Christmas Tree.